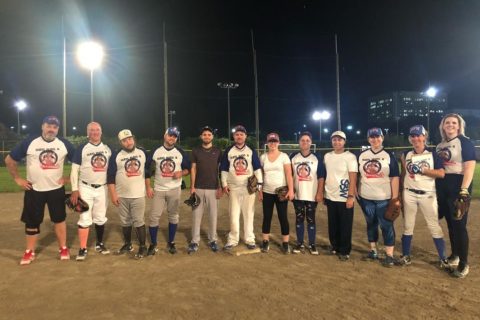 The game started off on an interesting foot, some might say the left food at Matt decided to hit a solo jack to start the game. As jerky as it was, it started a rally that saw 7 runs come in. By the second inning SBW were up 12-1. Too if the third saw Matt, Eric and TJ flash all kinds of leather to put them out 3 straight. In the 4th inning Evan decided he’d take one square off the throat, cause that seemed like a good idea, and Matt also took one off the arm to follow that up. The fifth inning was the Eric’s glove show as he basically fielded the side out. By the 6th SBW were up 18-9, and after some solid hits by the entire team in the 7th, 20-9 was the score. Great effort by all, and a big win for the Suds, buds and yes, even the Windmills got in there.