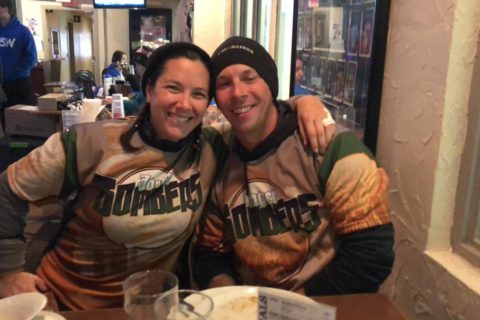 The game was off to a quick start, with a close play from Jager Bombers lead-off runner needing to sprint to first, followed by a double play. The Savage Squad also got off to a good start, with great runs by all of their girls to score a pair of runs.

Jager Bombers kept the outfield busy, with full effort on the base running. Making infield throw the ball allowed the Bombers to take advantage and score some runs, and narrowly missing another play at home to end the second inning.

After a few close innings, the Jager Bombers hitting picked up and they had full bases with 5 on 3, but Savage Squad pulled through with their third out to stop the damage. Jager Bombers followed that up in short order with 1B putting in max effort to stretch on the ground to finish off a double play to end the inning (far from the only time he did that this game), and then started off their next inning with a solo home run that almost killed the geese in the soccer field. Savage Squad also had their own home run, in the bottom of the last inning to score some runs and try to tie it up. Savage Squad had a great final offensive inning with the pressure on, with a nice stand up double by Miranda just over centerfields’ head and followed by a home run to bring her in.

All in all, it was a pretty close game (10-8 final score, with Jager Bombers edging Savage Squad) with only a few home runs. Both teams wanted to keep going, but the teams playing next were very happy to start warming up.