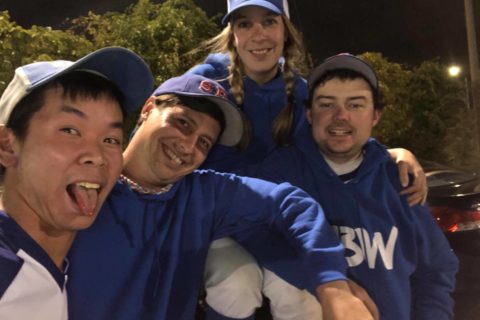 On a brisk night, SBW took to the field up against Maybe Next Year. However, the team wasn’t ready to wait til next year to qualify for Champ’s Night. With a quick 2 runs in the home half of the SBW inning, the team got off to a 2-0 start.

Throughout the game, some epic defence was made from all areas of the field, especially from Matt at SS and Melodie at 1B. Later on in the game, a fantabulous effort by Alex in CF almost got him a sliding catch…but in the end it was just a shitty situation with geese shit! The team was able to serve up more donuts than Suzy Q and Tim Hortons – a total of 5! Great job Team.

The game saw a bunch of lead changes and it led up to the team rallying together in the home half of the 7th for an epic come back. Hanging by a thread, a bunch of prayers were said in hopes that we would be able to finish off the come back. In the end, some clutch hitting, trickery base running and patience at the plate by the team…. We were able to pull off a 10-9 win!