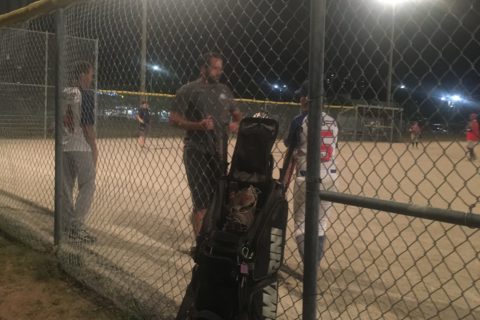 Needless to say it was a late night game and everyone was thrilled to be spending their Tuesday evening at the ball field.

It all started with SBW being first at bat. Alex was the first guy to the plate to get the game started. With our first hitter getting onto first base the buds didn’t disappoint and kept hitting those balls to the outfield for a total of seven points. After a slight delay to figure out if we actually had 7 points it was confirmed and the buds were all disappointed they had to get off those hard earned bases. Evil Empire had a few good hits followed by a HR for a total for three runs. Shortly after the buds saw those 3 players score they decided that it was enough and got the next few players out.

The buds are back it. It looks like they haven’t lost their streak from the first inning and are getting on base once again. Alex hits a HR for a big start with 3 runs. Followed by the two next girls getting some RBI’s. Can’t say what happened after that because I must’ve been distracted by the game. All I know is we got a total of 6 runs before heading back out to the field. Evil Empire is up to the plate and showed SBW that they aren’t the only ones that can make it up to 7 runs before being forced off the bases.

Back to plate, the buds want to keep their lead so we need some good hits. That plan was soon followed by a reality check that we already had an out on our first batter. I don’t know what happened but our only hope of getting some RBI’s was done after Julie’s hit. One player got in followed by SBW being forced off the plate with 3 outs. Evil Empire managed to play the way the buds wanted to with a total of 7 runs again.

SBW quickly realised that we lost our lead. A few stepped up to the plate and managed to get on base. Some pushed hard to run to the bases safely but still managed to be tagged out. None the less the buds were able to rack up 3 runs. Now it’s Evil Empire’s turn at bat and we all know that we have to stop them from getting any runs to have a chance at winning this game. The buds managed just that with a couple of good catches, snatches and throws. Stopping them with only one run.

Last inning and it’s SBW’s turn to the plate. We need two runs to at least tie the game. Everyone is feeling the pressure to play well and get some runs. We have a runner that’s been pushed to third by Eric’s hit. Now we’re really hoping that the next few at bat manage to get on base. Next up is a fly out and that gives us a total of two outs and two on base. The pressure is all on Dylan who struts up to theplate and has every bud on edge waiting for those two runners to come in for a chance at a tie. Dylan doesn’t disappoint because with a massive hit his ball flies right over the fence for a much needed HR. Everyone is cheering now because we are finally leading by one and may have a chance to win if we could just get a few more runs. Well, our luck stops there because we get to three outs not long after. Last inning and last chance for SBW to stop Evil Empire in their tracks. We work hard, we work as a team but the third hitter manages to get a RBI to tie the game. SBW really wants to finish the game with a tie and not a loss therefore the outfielders catch some fly balls and finish the game.