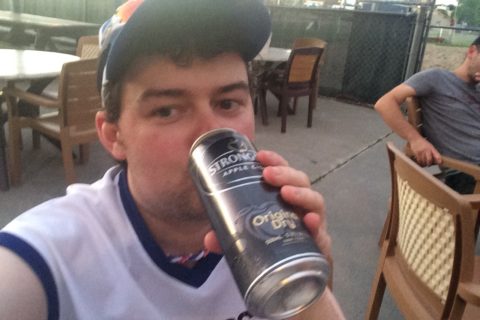 Dynamos came out strong in the first inning with 5 runs, but people did stuff, and outs occurred. Now, it was time for SBW to do some shit. And, they did! Alex led with a double, followed by Isabelle’s single for the first run. Seb hit a high flying ball that seemed to just hang in the air like Eric’s balls, which still haven’t descended. However, unlike Eric’s man-baby balls, this ball finally landed on the other side of the fence for 2 more runs. Julie hit a single and was then hit in by Big Poppy Peter. More outs. 5-4 for the bad guys. Fuck them!

At this point, I vaguely remember scores for the other team for each inning, but I believe they scored one here. Nothing really memorable. Clearly, since I don’t remember much. Although, I believe this is where I took a ball (arrow) to the knee after it hit was must have been a gopher popping its head out of the sandpit that people pretend is an OF at RA 1 and 2. Bad guys score 1. At this point, the ladies were ascertaining their dominance (insert inappropriate jokes that made you all laugh – LOL…) as the team leaders on the bats. Sarah got on base first with a single. Isabelle hit a nice double, some other people did stuff, Eric hit a 2 run double, and Julie hit a 1 run double. Good guys up 7-6 (maybe?).

The team with the large breasted lady on their jerseys took the field, reminiscent of a scene straight out of field of dreams. Unfortunately, we weren’t playing as well as those old white guys did. However, we were definitely as handsome and charismatic as Kevin Costner (I think he was in it?), along with Darth Vader. Runs may or may not have been scored. All I know is that somewhere between the 3rd inning and 5th inning they went from 6 to 17 runs by hitting balls and scoring runs. On the bats, Pete hit a nice, but selfish solo shot!

In the 4th SBW did quite well on the sticks. Hits came from Alex, spare Eric, Phil, Eric, Marie-Eve, Krystle, and Sarah. The men needed to flex their metaphorical dicks and show that they could contribute! We scored 5!

In the 5th inning we didn’t do much. justYn was the only person to score, with a few other hits.

Things looked good for the 6th inning. We were only down by 2 (17-15), and the bottom of the inning would have started with SBW’s ringer, THOM! However, shit hit the proverbial fan in the top. Needless to say, it was a bit of shit show, unfortunately. It is uncertain exactly how many scored, but they jumped from 17 to 24 or 25 like a fat kid pounces on a piece of candy that just fell off the picnic table into an inconveniently located puddle of mud. SBW now needed to score a bunch in the bottom of the 6th. Hits came from Phil, Eric, Seb, Julie, and Sarah. Although 5 runs were put on the board, it wasn’t enough.

Dejected at the result of the game, Julie decided to start doing win sprints to increase her base running speed, as she realized this was likely the reason for our lose.