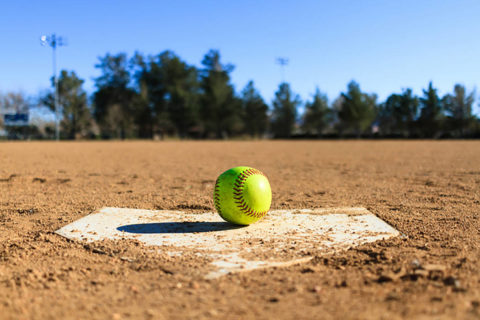 Ladies and gentleman we got bjs vs dodgers in the semi final playoff game at the illustrious diamond one.

Dodgers start off at bat with two solid hits but both were caught by Center field for outs. Batter three looks determined to get on base and lines it to left field for a double next up Danika hits a single past third base to bring home the first run! The dodgers bats are on fire as Paul hits a single down the left field line! Another single with two outs loads he bases. Fortunately for the bjs the next batter grounds it to short stop extraordinaire Alex who quick tosses it to third for the 3rd out.

BJS at bat starts off slow with a quick ground out to the shortstop and a strick out to Marie-eve. Next batter has enough of the games and snacks a home run to the volleyball court.

If my math is right the game is tied at the end of the first but honestly I could be wrong.

Inning 2 starts off with a single for Lindsey and a line out by the guy after her. Another single and a triple bring homes a couple more runs. The dodgers came ready to hit and put up five more runs!

The bjs bats came up short with nothing doing!

Dodgers lead heading into the third

Dodgers bats remain hot with some singles and a double and a run or two but a nice grab in right field ends the inning!

The BJS not ready to back down bring some batters home and Greg maybe frank? Not sure his name Somalis a three run homer to end the inning.

The dodgers how ever aren’t ready to lose this game and decide to put up 5 more runs including an in the park home run and an no doubter home run!

Lots more keeps happening but nothing really not worthy and to be completely honest my attention has shifted to the rugby soccer game going on behind me!

Paul doubles for the dodgers and a girl 3 insanely hard foul balls one off the wooden pole. Another line out brings up the bjs!

The dodgers at bat starts off shaky with a line out and almost the second out but the runner just tagged up in time! A couple runs were brought in before the final out!

Two quick outs for the bjs ends the game dodgers win in overtime what a game!!