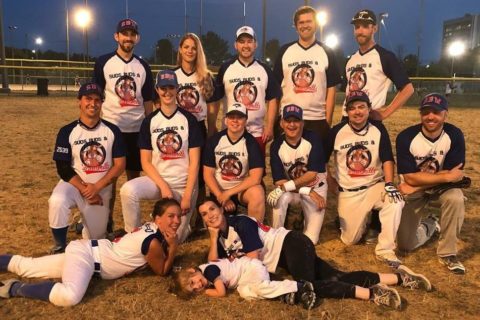 The evening started off on a bit of a bad note. There were 6-7 of us standing around wondering where the rest of the team was. Then Krystle and others walked up with music blaring and then it immediately stopped. Krystle then loudly yelled FUCK! It was perfect timing haha. The mood seemed poor.
With the buds batting first, it was a chance to cheer Krystle up with some early runs. That didn’t happen right away, instead there were two quick outs and the mood worsened. But then in good twist of events, the next several batters got on and some runs came in to score. Daniel specifically told me that I should hit a home run. I didn’t because 1 it isn’t as easy for me to just do that on command and 2 I figured I’d save it for him since he was the next guy up after me. Standing on third, he then got out and I questioned my motives. All in all, we did get an early lead in the first inning and the game was headed in a more positive note. I don’t remember the exact details and scores of the subsequent innings but I do know that we won, which is exactly what we expected to do.
There were a few highlights from the game.
In the bottom of the first, Krystle playing short stop, Bells playing first in my spot since Krystle doesn’t have a lot of luck throwing to me at first. A slow girl hit a ball to Krystle and she had plenty of time and was no further than 15 feet away from first but proceeded to make a full wind up and threw it as hard as she could… over Bells!
At one point around the third inning, with Eric pitching, there was a game of monkey in the middle. The catcher threw the ball back to Eric and missed him. Then the second basemen picked it up and threw it over Eric’s head back to the catcher. Finally, the catcher gave it back to Eric and the game continued.
Eric also hit an awesome homerun to center field to cap an inning with 7 runs.