The Butts led off the first inning with a HR. Their next batters weren’t able to put anything else on the board. The Screwballs answered with a 2 run HR followed by one of the ladies teaching the fielders respect by driving one past everyone to bring another runner home.

The Butts weren’t able to score in the second but the Screwballs continued to score w...

First inning as I sit in the stands Marie eve looks over and asks “is anyone doing the post game for finals ?!” I smile and say “impress me”

Pants ends the inning with a running backwards alligator catch 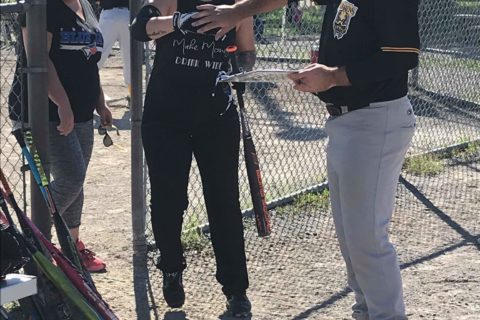 This game was wild folks! Back and forth, wicked fly ball catches and solid hitting and runs by both teams.The first inning saw les etoiles felantes put up 5 runs, to the krakens 3! Both teams struggling a bit with pitching but quickly starting to put strikes on the board...

Allllriiighttttt this game started off a little dull in the first inning with nothing happening, just outs outs and more outs.. Fast forward to the second inning when BJs started putting some runs on the board with 4!This would be a coming scene going on during the game with Tomahawks struggling to put runs up and the BJ’s taking advantage...

Defensive being a premium in BJ ga’mes for both teams is a total understatment. Again this was a close one that came right down to the wire.

After being shut out the first inning and having DBB going up 1 run in the first BJs managed to put up four runs in the third. DBB answered with 3 more runs making it a brand new ball game for the 4th inning.

Game 7 starts off with BJs trying to beat up on the yankees captain of the Fan club, FTG, and his team Evil Empire.

Game started close with BJs up 1-0 after the first. Star Wars (non-disney version) The Empire indeed did strike back putting up 3 runs in the second after holding the BJs to 0 runs

Defence was the name of the game overall as going into the las...

This 5 inning game can be best discribed by 4 words “Girl Power” And “HR derby”. The game started pretty rocky with rule debates. Things got kind of resolved with people giving up on the subject. The girl power was happening the entire game for both team...

Outfield played with 4 Deep and in the first inning Mills makes an awesome outfield catch! End of the second inning H2O mercies the other team with 5 runs putting us in a 5-3 run lead! 3rd Inning we shut down the screwballs maintaining our lead. 4th Inning the Screwballs mercied us to bring up the lead for them 8-5...

Big gme hapenning on diamond 2 on this wonderful day! 1st inning was a bit rougher on the edge as both pitchers has to get back in the game and gain experience. In 2nd, solid hitting by the visiting team with 4 pts in. A pop-up will end their streak with a missed tag for a double play...