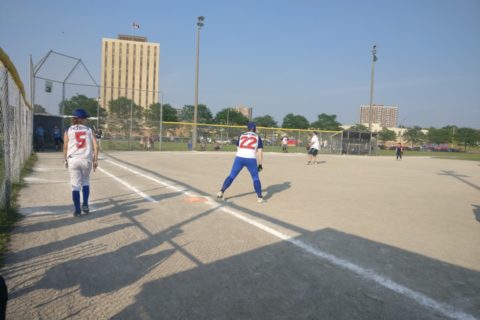 The rec softball league game against the Iron Pigs (IP) was on a stifling hot. Tuesday night. Bells, Krystle and a new player, Kerrin, joined for the early game. The first inning put SBW off to a slow start, allowing in 7 runs and subbing the pitcher at the end of the inning. SBW answered with two slow and steady runs, with Frank moving up batters while taking an out.

By the second inning, we thought we were hitting our stride, only allowing one run, while taking 4 (score at this point was 8-6 for the Iron Pigs). Dyllan really ran hard while keeping an eye on the other team, advancing from first to third on an error by Iron Pigs after a great hit from Sarah Rose. Krystle also made an excellent play, bringing in several runs. Innings three and four, however, were disappointing for runs and defense, resulting in a score of 11-7 for the opposition.

In inning 5 we started taking back the game, with a killer 3-base hit by Eric. We brought 3 players home, and had some excellent running by all, despite the heat.

The top of the final inning had some challenges, with some missed rules and a collision at home plate. No one was hurt, which is what mattered, and both teams were sportsmanlike in the aftermath. Matt caught a great hit to get the third out at the top of the fifth. In the bottom of the final inning, down by just one run, Sarah Rose had a beautiful hit after a disappointing double play that got both Dyllan and Katie out. Unfortunately, the Iron Pigs caught a great hit from Matt, leaving us out in the cold 11-10.

Both teams played well, in spite of the heat, and will be ready for a stronger game next week!