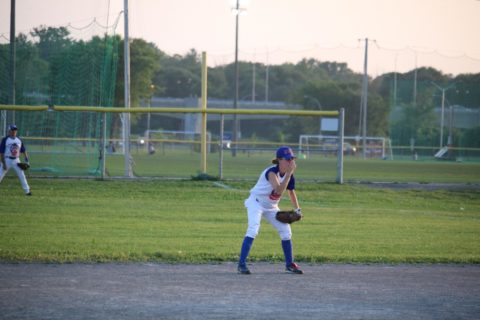 It was a beautiful night for a ball game as our SBW’s took on Dan and his Playboy Bunnies (plus a few strong additions). With the division locked up, Playboy mixed up their lineup with Dan pitching instead of holding down center field as usual.

Alex started the game strong catching a fly ball at rover to put Kevin away with the first at bat. From there though it was all down hill. Playboy Bunnies would string together a pair of singles before a pop fly was caught behind 3rd base by Justyn. Another single by Trish brought Brad up to the plate with the bases loaded and he didn’t disappoint, hitting a grand slam while simultaneously also almost decapitating the pitcher on diamond 4 in the process. Having enough of it, Justyn picked a ground ball and threw a rocket to Wes at first who made a sick back handed scoop to get the 3rd out of the opening inning.

SBW had a chance to answer back but came out flat with a 3 up 3 down bottom of the first.

The 2nd inning started like the first with Playboy hitting a series of singles followed by another 3 run home run. Brad decided to put another one out of the park giving us the 3rd out of the inning. Now down 7-0, Michelle decided it was time to mash and started the inning off with a triple! Justyn decided RBI’s are worthless and hit a hard ground ball directly at Dan for an easy and frightening first out. Jessica came to bat and knocked Michelle in with a single to score SBW’s first run of the game but it would be all the team could muster up.

In the 3rd inning Pete caught two balls hit to left as he adjusted to the new laces in his glove and Wes scooped up a ground to first to get out of the inning damage free!
With our first two batters out, Dallas found a hole and hit a single to get on base. Oh Captain my Captain aka Eric Delisle came to the plate and hit a pop fly into a gale force wind to send it over the fence for a 2 run home run, making it a 7-3 game.

Momentum seemed to be shifting in SBW’s favour as we head into the 4th. A ground ball was hit to Justyn who got his glove stuck in the dirt trying to pick the ball on the run allowing the running to reach first. The next pitch was another hard hit ball to short that had double play written all over it. Unfortunately, Justyn went “Olay” for the second time in a row taking the ball off his ancient glove and getting a bloody thumb as a result (Thanks Pete for the Bloody bandaid.. ). The next batter hit a ball to center field that got bobbled, leaving Kevin to try to push a 1st to home on the play. An accurate relay throw was made from the outfield (I think it was Dallas, I remember her epic burp) to Justyn who threw a rope to Jess, who made a great catch at home to get the out! Eric would get a pop fly and a soft grounder to end the half of the inning down 9-3.

In the bottom half of the inning Jess gets on with another nice single hitting gap in center field. Dylan eases a ball out center for a 2R shot to make the 2 runs back and make it a 9-5 game.

The 5th inning starts off well with Pete making a catch at the fence to rob them of a solo. From there, the wheels would fall off as their bats came alive and wouldn’t turn off for the rest of the night. After scoring 6 runs in the inning, Phil eventually helped us out by putting another one over the fence for the 3rd out of the inning, leaving us down 15-5. In the bottom half Pete was able to get on with a double but it was as far as we got, leaving the inning empty handed.

Last inning was called and Playboys bats stayed red hot as they were splashing the ball all over the field and just out of the reach of the SBW defense, eventually leading to another 8 spot on the board to take a commanding 23-5 lead. A couple more hits by SBW (lead by Jess who went 3-3 on the night), but nothing more was mustered up as PBB was just too much for SBW on the night.

Playoffs is next and it’s time for SBW to shine!

-Justyn with a Y