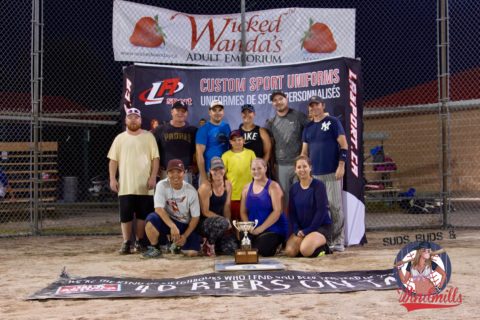 A div Finals for Sloppy Seconds

Winding up this tourney on the A side two power house teams, the Dirty Ball Bags (or Playball Boys to us RAers) and the Evil Empire (for you RAers out there a hybrid of EE and the Deloitte Dynamo).

Game starts off with a big push by the dirty ball bags, highlighted by a little sex on the beach, with Eric S hitting an in park home run!  When you only get 3 home runs a game, those are golden.  Followed by a lot of aggressive base running and slides pushing extra bases. The bunnies Dirt bags (can we say Dirt bags?) start off strong with a 5 spot.

Unphased  but the attack, the empire fire back with a monster home run from Jimmy landing into the other diamond (Jimmy and with work gloves hard at work!) and answering back with 5.

Energized and ready to go, the ball bags, come out strong with well executed line drives and more pushing extra bases and forcing plays at two.  They chip away an ad in another 5, 10 – 5 Bags.

Trying to steady the ship. The SS Empire fired back with some good shots to get runners on base. Captain Bresee – known to most as FTG, or some as Chris – lands a ball oppo on the fence to cash in the mercy runs. 10 – 10.

Eugene the giant leads off with a solo,  the bunnies keep pushing with chopped balls and aggressive base running! But a big snag at two, turns a double to hold them to 4! Is this a sign of things slowing down? 14 – 10. Bottom of 3 for the Evil ones, has ladies leading off with a perfect gap shot followed by a drive for two runs.  But the D comes up strong for hold them to just those two runs, 14- 12.

4th keeps on rolling and the Ballbags chip in 3 more runs. Pushing their lead to 17 – 12. The Empire rfall flat to start with a flyout, but rally around  Ftg at bat dropping a ball deep to center. Big throw from 3 to 1 to ends the inning, Empire manage to get back 2. 17 – 14.

Top 5 bunnies up 3 get a big lady double to lead off the inning but end up coming out if the inning shut out! SS Empire firing back with lines to left field. Bunnies to answer one with a monster diving catch in left field Cashing in all sorts of runs with sac flies and good base hits (. Mike pulled a hammy legging a triple), the Empire is rising. 17 – 18.

Top 6 with Evil Empire up one, the Ball Bags only manage to get on, but do tie it up 18 – 18. In the bottom frame, Empire lead off with another double. Lots of rally hitting and the Empire walk away with three more runs and the lead! 21 – 18.

Top 7 for all the marbles. The Dirty Ball Bags, start firing back, crushing line drives. Deloitte captain/ Thrid base takes one off the mask but stills turns the force at two to get the second big out of the inning. Evil Empire holds onto the lead with a great catch in center field off the shoe laces – Evil Empire wins it!

A great game to finish off a great day. A thanks to all the teams, volunteers and umpires who came out and made this day possible!!!